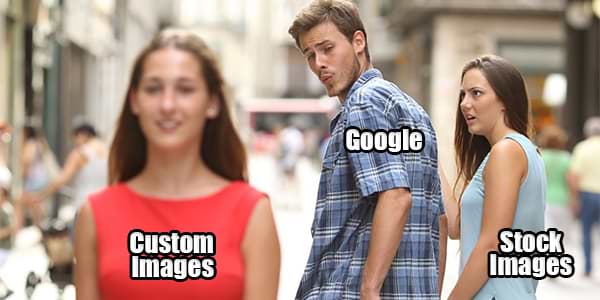 “Something is very broken”. Not a good thing to wake up to on a Monday morning, right?

It’s coming from parts of the SEO community who are seeing their posts being rejected by Google.

The primary culprit? Images not adhering to Google’s Image guidelines.

“Stock imagery, or photos or videos taken by other parties, are not relevant and may be removed. If the primary subject of the content is irrelevant to the location, it may be removed.” – Google.

The issue seems to be pretty widespread too, just like Corona beer or the virus.

Help forums are filling up with rants and complaints from many SEOs, although some have reported that they have now been able to get their posts back up and running.

However, others are pointing out the challenge of following these guidelines, which appear to be about as clear as mud and very confusing.

For example: “Superimposed text or graphics, including promotional content such as logos, are subject to the following requirements:

For 360 photos, superimposed content must be limited to either the zenith or nadir (top or bottom 25% of the equirectangular image), but cannot be present in both.”

There has been no official statement from Google, yet. However, we will keep you updated as soon as we have more information from Google’s end.

Okay, let’s quickly get you up to date with this. Karolis Skirpka posted in the People Who Don’t Pay FB group for the affiliate industry about his recent issues with AdsViaFeed.

They’ve been coming up with excuses for over four months to avoid paying an outstanding amount of around $22k.

And no, this isn’t just one person. Loz Green chime in on the comments, claiming that he has also been struggling to get paid by them. That’s two reputable people in the industry, and that’s a big warning sign for anyone thinking about doing business with them.

Who is AdsViaFeed? It’s the publisher side of the Megapush ad network… Yep, unfortunately the same Megapush who sponsored several newsletters for us. If anyone can give us more info from the company side, you know where to reach us!

The Crew’s Thoughts: This happens at least once a year in the industry. It’s frustrating but it’s also reality.

Hopefully, Karolis, Loz and everyone else involved gets what they are owed. If you know people who can help, head over to the group.

As for our side, we reached out to our contact at Megapush and we’ve taken down the sponsored posts with Megapush until we get confirmation that this has been solved and the company is in a healthy position. Yeah, they were the sponsor of today’s podcast too. That’s why you might notice some speedy editing to ensure we haven’t mentioned them.

We know it’s always a risk that a company we work with can end up in a situation like this. It’s impossible to predict, so we decided that when something like this happens we will immediately report it and take down as many ads as possible. Although, we do want to ask: If you were in our shoes, what do you think the right thing to do is?

As we always say, it’s important to make up your own mind and not blindly follow what we or anyone else says. We could be in the wrong, and if that’s the case we’ll do our best to quickly rectify it.

✅ Let’s take a moment to set our business processes right

Come over and say hello to Mads.

Mads is an experienced management expert with a focus on SEO and e-commerce companies, working with different sized companies, from Shell to Coca-Cola to small online businesses.

Haven’t you often wanted to get a glimpse of how corporate culture is different from our entrepreneurial lifestyle. Mads bridges that gap here.

Whatever your business is, this is equally relevant and of utmost importance to all of us because this is what will fine tune our internal processes and mindsets.

Mads will go on to touch base with a variety of topics like:

Monday ecomm-juice to pump straight into your mind

Yo! How are you doing our dear ecomm friends? Over the weekend, we found an interesting Twitter thread packed with a lot of knaaauuledge! The author is Dan Barker, and you’ll probably want to head over to Twitter to thank him.

Let’s have a look at some of the points he shared:

+ Competitor analysis: Most e-commerce platforms use ‘sequential invoicing’ (ie, order #s go 001, 002, 003…). This is a good chance for you to spy on your competitors’ store. By placing a test order once a month on a site, you can tell how many orders they had. Do it for a year and you can determine how fast they grew, when their peaks and troughs were, etc.

+ Paid search: If you sell in multiple categories and your competitor only sells in one category, brand bidding on them is better for you than it is for them: They can only serve a small portion of your market, while you can serve all of their market and those customers may buy your other categories.

+ Customer Satisfaction: There’s a phenomenon called ‘Service Recovery Paradox’: If a customer experiences an issue, fixing this in a way that makes them happy sometimes leaves them more satisfied and likely to recommend you than if there had never been an issue in the first place. Maybe you want to cause glitches on purpose?

+ User experience: E-commerce homepages are usually viewed similarly as the entrance area in a brick and mortar shop, but they’re not. In a physical shop, 100% of visitors enter through designated entry points.

On an eCommerce site, roughly 1/3 of visits will enter via the homepage. People landing on your products page might never have heard about you. To combat this, make sure you include the kind of content you want people to see, no matter which page they entered the site on.

+ Analytics: The channel data in Google Analytics can be wrong: If a visitor comes to your site through email today, and then comes back tomorrow by directly typing the address into the browser, tomorrow’s visit will show in most Google Analytics reports as being from email.

+ Site Speed: The general ‘average page load time’ in Google Analytics is flawed. It’s an average based on a very small sample.

The most useful site speed report in Google Analytics can be found in Page Timing → Distribution.

Alright, we’ll stop here. But Dan shared at least 50 more tips you might want to check out. He also shared some of his knowledge of TV advertising. Not sure if you’re into this channel, but if you are it’s definitely worth a look!

This is Bill. Bill is eco-friendly. Be like Bill… Not so easy tho

What should you do when you are so crazy-rich that you can put a finger on almost anything you want on God’s great Earth, but you don’t wanna tread the guilty path of spoiling the planet?

Your turn your lavishness eco-friendly.

That’s exactly what Bill Gates has been doing by heavily backing eco-friendly tech.

He recently bought the first-ever hydrogen-powered super yacht called Sinot’s Aqua.
Standing at $644M, this 370-foot boat has everything luxury stands for – including five decks, space for 14 guests, 31 crew members and even a gym, but it runs on two 1MW motors fuelled by supercooled hydrogen tanks.

It doesn’t blaze through the ocean at top notch speeds, but at a speed of 19.5MPH, its 3,750-mile range is good enough for cross-ocean journeys.

Do you guys think it’s a great move by Bill, or would you agree with the critics that say he should have invested in electric and hydrogen vehicle projects instead?

Would that be more of an impact than one boat designed for luxury pleasure cruises?