Google is definitely keeping you SEO guys on your toes recently. Frequent ranking algorithm changes, sunsetting of the old Search Console and now this big announcement… Some of you might not be taking a vacation this holiday season, although we do hope you get the chance for one!

Previously, links using the rel=”nofollow” attribute were not used for ranking algorithms by Google. However, starting today, the nofollow attribute will be treated as a hint for ranking purposes. 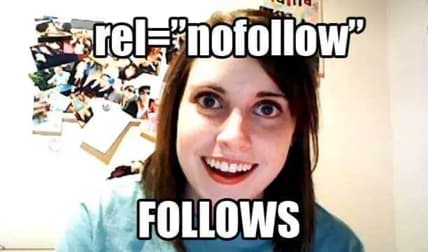 Honestly, we aren’t entirely sure. We also don’t think that, at the moment, anybody can confidently say what exactly this means. Google is basically saying that nofollow links might now be counted as credit and considered as part of spam analysis, or for other ranking purposes.

Starting March 2, 2020, Google will also use it for crawling and indexing purposes. Again, Google says it will use nofollow as a “hint” to determine what should be indexed or crawled. However, its recommended that you use robots.txt or meta tags for that purpose.

The two new link attributes are:

All the link attributes (sponsored, UGC and nofollow) are treated as hints about which links to consider or exclude within Search.

As of now, you don’t have to make any changes to your existing nofollow link attributes. However, for sponsored content, Google recommends switching over to rel=”sponsored” wherever applicable.

Well, looks like a lot of work for SEOs, agencies and all the SEO tool providers that track links.

Back in June, we covered the news about Shopify building its own fulfilment centres across the US to help its merchants with smoother order fulfilment.

In order to further boost its efficiency, Shopify has now acquired the warehouse automation tech developer 6 River Systems for a whopping $450M.

This new acquisition gives Shopify access to the same robotics experts that helped Amazon build their own robotic infrastructure.

As per Shopify, the new technology is expected to reduce shipping costs and result in quicker delivery times for customers.

Shopify aims to provide this technology to its smaller merchants using its Fulfillment Network. This will allow them to compete with retail giants offering one or two-day shipping. Sweet for your ears, uh?

Currently, the 6 River Systems operates in over 20 facilities in the US, Canada and Europe and fulfils millions of weekly units for companies including DHL, XPO Logistics and Office Depot.

🦹‍♂️ Hey, it’s GiddyUp here… Do you realize the affiliate industry is stealing from you?

Sure, there are copycats trying to steal your work all the time, right? You try to fight against that but it rarely works because all your work is out there, for everyone to see…

There’s another problem aside from copycats… Some affiliate networks might be stealing from you. How? It’s commonly called scrubbing or shaving and it’s a process where the network attributes fewer sales and leads to the affiliate.

Why does this happen? To boast higher payouts usually… But if everyone does it, and everyone knows about it, then there’s a better question to ask:

Why is scrubbing still happening in 2019? The simple answer is that everyone accepts it as “the norm”. That’s crazy! Scrubbing is equal to stealing – it’s clearly unethical and likely illegal, with long-term negative impact on a network’s reputation. It also makes life much harder on affiliates because they cannot optimize campaigns properly. Don’t you agree?

We want to propose that the whole industry stops stealing and adopts a model of transparency to partnering with affiliates.

At GiddyUp, we pay for all sales our partners make… Period. We generate as many sales as possible from the traffic they send us, then we track and pay them for those sales… Even if they come from our own paid search or retargeting campaigns. This isn’t just fair, it’s good business.

For years, this has been a unique selling proposition here at GiddyUp. This shouldn’t be unique to us! For the industry to advance faster, we need to continue building trust between affiliates, networks and advertisers by “paying for every sale”.

Yes, there will still be bad actors, but as long as we look out for them and call them out on these practices, we’ll be better off!

“Imitation is the best form of flattery… but stealing is illegal, and nobody likes a thief!”

We look forward to a day where scrubbing is a thing of the past. The sooner this happens, the sooner we can attract more budget from huge brands into performance marketing.

For more of our thoughts on the incredible opportunity ahead, check out GiddyUp Co-Founder Topher Grant’s Affiliate World Europe 2019 speech!

Read the data and keep it clean

Two posts about data. The first is about gathering the right data and building up patterns, while the other talks about building data the right way. Enjoy!

A while ago, we shared a post that supported the theory of focusing on Purchases campaigns on FB because FB knows who is more likely to buy at the moment.

This time, instead, we’ll talk about why you shouldn’t do it. Bøgdan Alexandru Radu’s theory is that if you only target impulsive buyers by optimizing for Purchase, you’re eating only one slice of the pizza.

Basically, you’re missing out on all those non-impulsive buyers. But they’re still buyers, right? And you want the whole pizza, right? So.. how can you do that?

First, analyze your visitors’ behaviour on the website: Some will buy impulsively, some will read reviews and come back later, and others will look at the images and then decide to buy.

By analyzing this data you will unearth patterns that are different from those of an impulsive purchase:

So, first you should focus on finding these patterns. Then, you should leverage them by giving every group of visitors exactly what they want. You can do all this by using the power of the Facebook algorithm to find these users.

An example? Run reviews style campaigns to users that watched or read your reviews. The sceptical ones. You can then expand this with Lookalike Audiences.

Wanna dive deeper into this type of optimization? Have a look at Bøgdan Alexandru Radu’s post.

Another post on how to make Facebook work better for you. This time, we’re talking about consolidating spend.

To help Facebook make well-informed decisions, you need to feed it as much data as possible. And, according to Dimitri Nikolakakis, the best way to give Facebook this data is to consolidate your spend.

First of all, you should avoid running a large number of low budget campaigns, which effectively suffocates the FB algorithm. Also, avoid launching new campaigns every 2-3 days as soon as performance starts to drop.

According to Dim Niko, your campaigns should only be divided by: Top of funnel, middle of funnel, bottom of funnel and by offer.

This obviously depends on the kind of business you’re running, but the fact is that the more you consolidate your camps and spend, the easier it will be for the algorithm to optimize. This because you will be spending more with each campaign, subsequently building up more data for FB to use.

You’ll find the answer at the end of this email.

Cool tech, (funny) business, lifestyle and all the other things affiliates like to chat about while sipping cocktails by the pool.Opulence for scuba divers

One company that always rocked in the marketing and branding areas is Apple. We’re sure you’ll agree, right?

Their product launches are especially famous, and their marketing is so strong that they can sell products before even putting them on the market.

The giant human aggregations outside Apple stores on the release days are proof of this. All this by keeping prices higher than the competition.

As you probably already know, Apple made the headlines again yesterday with the announcement of the iPhone 11.

Well, we’re not Apple aficionados and we’re not here to talk about all the device features.

We just wanted to emphasize the company’s awesome marketing efforts. This marketing success has taken Apple to the top and helped it stay there.

And here is a great video that the company shared on Twitter for their new launch yesterday.