Traffic study of 3.2B site visits

Kyle Byers from GrowthBadger recently conducted a study in which he analyzed 3.25B site visits across May – July 2019, with the aim of understanding the reliance and effects of various traffic sources across different industries.

The primary data sources of this study were SimilarWeb and Detailed.com.

Here are the key takeaways from the study: 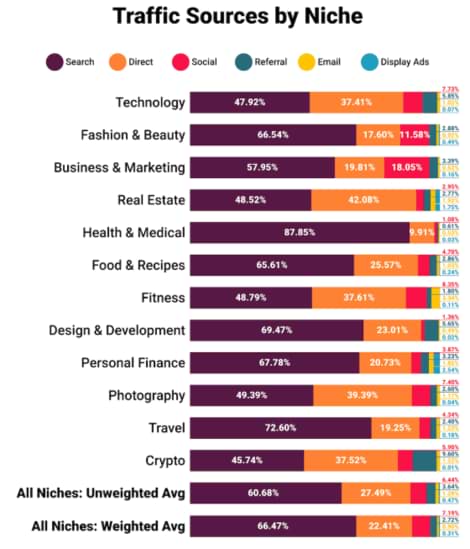 Well, that’s just the tip of the iceberg.

You can find more granular details, along with graphical representations of detailed statistics from the case study here.

Kerry Egeler shared the whole funnel he used to make $2.4k from one t-shirt in about 3 days. It covers Messenger, email and FB Ads.

Sounds interesting, so we’ll save the ink and go straight into it.

Let’s have some fun.

Then, Kerry went for step number 7: He sent the promo to his 5k email list and got 100 more conversions. Not a huge conversion rate, but still a sweet return considering he didn’t have to pay a dime for the promo…

Last point to add: This sale was a limited promo that lasted only 72 hours.

Looks like a complete and effective case study! Even better, it’s adaptable to every store: Just take your best seller, make a limited promo with it, add a pair of upsells and cross-sells… and don’t forget to leverage your messenger and email list.

Something to test for the BFCM?

🌈 The only tool you need to manage all your tasks, teams, campaigns and clients in one collaborative space

We often get asked: How do you put out this content every single day? The answer starts with using tools built for today’s marketer.

Today’s marketers are not always in the office, they have teams and clients all over the world. So they need a tool that makes sure Jenny who lives in Bali can work with Alan who’s based in New York.

Those are just some of the reasons 350k people in 80 teams across 76 countries swear by monday.com. It’s built for today’s modern digital marketer to easily manage local, hybrid or remote teams. From anywhere, anytime, on any device.

The best part? You can sign up for a 14-day trial with 2 clicks and use its full power. It’s free, no CC and no other commitment.

This story is about a physician and a lawyer who managed to build an ecomm empire from scratch, rose to $100M in venture capital out of the blue, and then failed spectacularly.

John James started his first e-commerce business in 1995, and it eventually helped him pay his way through medical school. Later, in 2001, he started a second store with his brother. The aim was to make $30k per year, but by 2002 they were making $30k per day! Talk about wrong forecasts…

Back in the good old days, they leveraged Google arbitrage to grow at a very fast pace. Google AdWords was still a cute baby, and you could hit the top spot for a few pennies. Basically, they started with a $48 advertising budget and built an 8-figure business with it.

The diamond of this group was Country Outfitter, a cowboy boots brand.

What was different from today? They didn’t have all the tools we have today at our disposal, so had to develop their own software. Not only that, but they also had to build their own warehouse and fulfilment centers, but at least the marketing was easier and cheaper!

In fact, their use of Facebook’s nascent ad business gave them a huge advantage.

The strategy we used to crack the Facebook code was counterintuitive. Rather than selling boots directly on the first visit, we changed our goal to get multiple visits from the same visitor, and make the first sale over time. The goal of the first visit was simply to establish a relationship with the customer.

They built an 11M strong email subscriber list with giveaways on Facebook for their Country Outfitter brand. This brand went from $100k/month revenue to $14.5M/month in just 6 months!

What caused the fall? 18 months after selling the majority of Acumen Brands, John stepped down as a CEO. They were heavily focused on Country Outfitters, but after he left his CEO position the company lost the CTO and vital marketing talent at the same time.

It’s a great story! If you want to discover more about John James’ business adventure, you can read the full post here. He explains how they used to rank on Google, what they leveraged to grow their Facebook audience, and what the differences are between today’s environment and their initial stages.

It’s always good to learn from the past!

Poor people have it. Rich people need it. If you eat it you die. what is it?

You’ll find the answer at the end of this email.

Cool tech, (funny) business, lifestyle and all the other things affiliates like to chat about while sipping cocktails by the pool.Opulence for scuba divers

It’s not just FB and Google, even innocent-looking SIM cards are being used to spy on users’ data.

Cybersecurity researchers have identified a new vulnerability in SIM cards that allows remote attackers to compromise cell phones and spy on users just by sending an SMS.

The technique is called SimJacker, which uses the dynamic SIM toolkit called [email protected] browser. And guess what? This is already used by mobile operators in at least 30 countries.

Here’s what’s more horrifying: There is a private company actively working with governments to exploit the vulnerability. This has been going on for at least two years and is used for targeted surveillance on users across several countries.

As per the researchers, SimJacker works on all manufacturers and mobile phone models, as it exploits a legacy technology embedded on SIM cards which has not been updated since 2009, putting almost everyone at risk.

It looks like there’s absolutely nothing we can do about it either, except requesting a SIM replacement that has proprietary security mechanisms in place from your service provider.

Have a great day ahead!